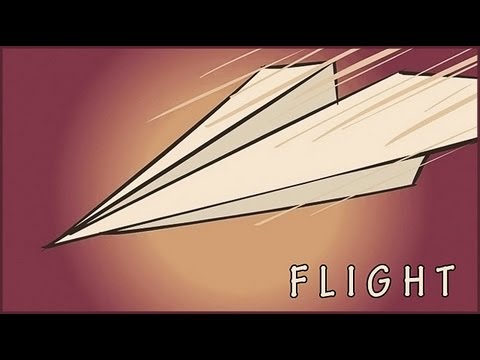 Have you ever wondered where and how far the paper airplane you made from the notebook paper inside your classroom goes? Wonder no more. Flight is a game that will bring back your childhood memories. This will bring our classic paper airplanes to life. Stroll the historical sights of different countries from all around the world. Go up and down the different layers of the atmosphere while collecting objects that will help you stay up in the air longer. While it is always amusing to try to go up as high as you can, you should be careful of jet streams that will cause you to slow down and possibly crash faster. Don’t worry if you hit the ground, your paper airplane won’t shatter and it won’t even be damaged.

Before the start of every location, which is levels or stages for other games, there is a short video clip that shows someone writing a note on the paper before it is made into a paper airplane. The plane then is tossed into the air, hoping it would reach the right person. The paper airplanes reach different places like London, Paris and Egypt. You can only go to the next location if you have already traveled a certain distance. Pick up the plane and flick it going to the right to start the game. It will start flying and it will encounter a lot of different things while on the air. The only controls you need are spacebar and arrow keys. Collect stars to earn money so you can buy numerous upgrades in the shop.

While it is impossible for us to modify our paper airplanes during our childhood because the material limits us to do so, every possible upgrade you can think of can be done in Flight. There are available upgrades for the model of the plane, the engine, fuel and there is even a mystery upgrade offered. These are extremely helpful because the levels also get a bit harder. You would not want to travel 2000 kilometers in your same old paper airplane, would you? Use the fire engine for extra boost then pair it up with the green fuel that will reduce your gas consumption. You can also change the model of your plane and make it lightweight to prolong the fall or crash of your plane.

While stars are very useful because they give you money, the cranes can also come in handy. It doubles the amount of money you get per star. Upgrades are available not only for the plane itself, but also for the stars, cranes and other features in the game. Improving your plane may cost you money, but it will be worth it. When an upgrade is unlocked, you can already get it if you have enough money. It can be bought more than once since the improvements also have levels. And of course as the upgrade level goes up, the price goes up too. Try to collect as many stars as you can and before you know it, you have already maxed out all your upgrades. Travel as far as you can in every try because at the end of the game, the number of attempts you made will be equivalent to the number of days it took for you to complete your journey. Good luck and enjoy!