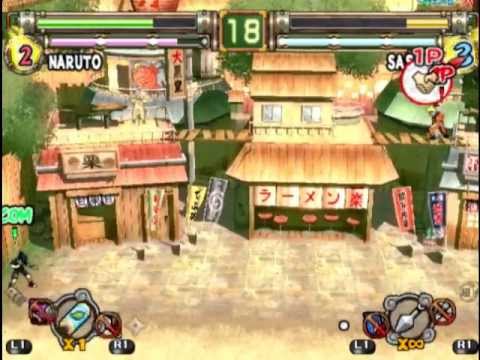 Ultimate Ninja 2 features a similar gameplay experience to Ultimate Ninja, featuring many of the same gameplay elements and geography and mini games in the story mode. The game also features an RPG-esque story mode, the first half from the series, the second being an added story arc that takes place after the Tsunade Decision arc.
Ultimate Ninja 2 is the second game to use a support, though, they are not seen until Ultimate Ninja 5 since in Ultimate Ninja 3 the fighter must obtain items. But, after you have chosen the character you want to be, you are allowed to choose your own support, instead of the game giving you one.
There is a total of 32 characters to choose from (33 in the Japanese version with the inclusion of Doto Kazahana as a promotion for the movie Naruto The Movie: Ninja Clash in the Land of Snow). Some characters have also been fused together, so the player must use a certain special jutsu to activate them, such as Sasuke with his Curse Mark of Heaven, although the separate character of Nine-Tailed Naruto remains, this version of Naruto using his Level 3 Ultimate from the first Ultimate Ninja game as a level 2 version.